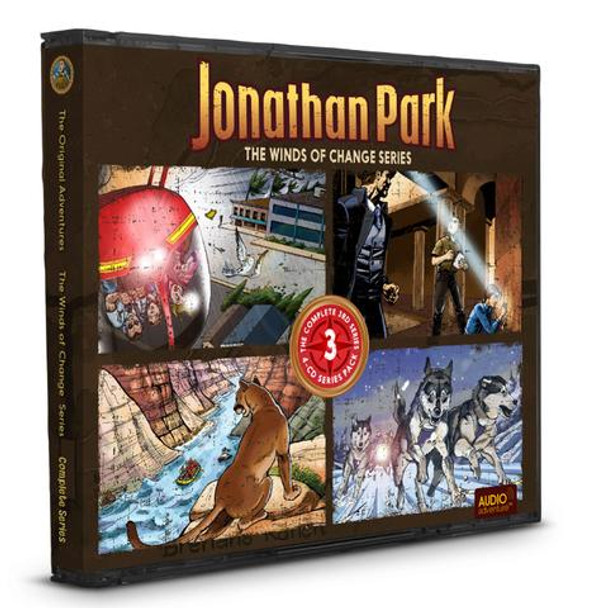 Jonathan and Thad take refuge during an electrical storm. The intense heat from a dangerously-close lightning strike forms several fulgurites. The boys want to put them on display in the Brenan Museum of Creation, but two men will stop at nothing to steal them because of their belief that they posses mysterious New-Age powers. Later, a powerful hurricane is headed toward Daytona Beach and the Park and Brenan families join a scientific mission to drop sensors into the eye of the storm! Thats when things go wrong, and the plane is forced to make an emergency landing right in the path of the storm! Join the two families as they fight to survive the wrath of Hurricane Ophelia!

- Creation Model for the Flood

The Ultimate Road Trip - CD Set by Adventures in Odyssey

MSRP:
Now: $21.99
Was: $24.99
Fasten your seat belts and settle in for a road trip adventure with the folks from Odyssey. Don't miss the on-ramp to non-stop action and character-building fun for the whole family in our Ultimate...

MSRP:
Now: $13.99
Was:
Hymns from the Zion's Harp/Hymns of Zion played on a digital piano, using different effects.  Absolutely beautiful!  Listen to the samples below     1. Begin With a...

MSRP:
Now: $14.99
Was:
A collection of a variety of music groups from Goodfield, IL (DFI, Redeemed, Sharper Iron, B4 Him, Glorify Hymn, and others).  Some hymns are accompanied by guitar and bluegrass instruments,...

MSRP:
Now: $9.99
Was:
A beautiful and inspiring collection of traditional hymns, sung by choir and accompanied by full orchestra.  The theme of this recording is sounding the truths of the Great Reformation: opening...

MSRP:
Now: $7.99
Was:
Favorite hymns sung by choir and accompanied by full orchestra.  A beautiful and inspiring collection of traditional hymns to add to your daily music selection! Recorded by Fountainview Academy...

Whatever Is Pure CD by Acapeldridge (Michael Eldridge)

MSRP:
Now: $14.99
Was:
Men's four part a cappella quartet with beautiful harmonies, and traditional hymns with a few contemporary songs.  All 4 parts sung by Michael Eldridge. Fourth in the popular "Whatever Is.....

Quicksand: Getting to the Bottom - Lamplighter Theatre Dramatic Audio CD

MSRP:
Now: $35.00
Was:
Truth shines bright in life’s darkest hour. One perilous moment can change our lives forever, as when the Ripley baby suddenly falls overboard. But the simple faith and enduring trust of...

MSRP:
Now: $30.00
Was:
We all know what it's like to harbor that gnawing feeling that rears its ugly head as envy. Christians are not exempt, as we see in the case of Charlie. "But don't it seem hard that some folks should...

Our Favorites: Actors' Picks - CD Set by Adventures in Odyssey

MSRP:
Now: $29.99
Was: $34.99
Adventures in Odyssey cast members have compiled their favorite episodes from the past 25 years. Learn why these episodes rise to the top for the voices of Odyssey while you listen to over 9 hours of...

Moment of Truth - #48 CD Set by Adventures in Odyssey

MSRP:
Now: $21.99
Was: $24.99
Everyone in Odyssey is searching for the truth. Grady discovers more about God, thanks to the Imagination Station. Eugene and his father must uncover the truth about a sinister archeologist, so they...