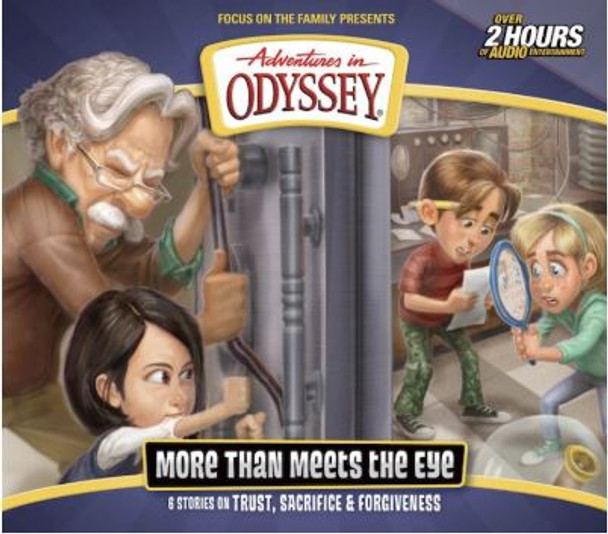 Album 67, More Than Meets the Eye, explores six stories on trust, sacrifice and forgiveness.  Over 2 hours of adventure!

Mystery and intrigue abound as Emily and Matthew are trapped inside an unfinished escape room in the basement of Whit's End. Meanwhile, the Odyssey High School Football team heads toward the state championship and deals with unexpected challenges.

Plus Bonus Material: The true story behind "Rightly Dividing"

Created for ages 8 to 12 and enjoyed by the whole family, Adventures in Odyssey award-winning audio dramas teach lasting truths and bring biblical principles to life, with just the right balance of fun, faith, and imagination. The adventures often start with grandfatherly Mr. Whittaker ("Whit"), who runs an ice cream shop called Whit's End. Young friends from all over town come to Whit for advice, and his employees (perky Connie Kendall and genius Eugene Meltsner) often learn as much as the kids And Wooton Bassett, the zany, fun-loving mailman, helps the kids in his own unique way.

MSRP:
Now: $19.99
Was: $24.99
Life is full of surprises—some that are welcome, some that aren't. A trip in the Imagination Station is usually fun, but three generations from the Parker family are surprised to find that it...

Taking the Plunge - #59 CD Set by Adventures in Odyssey

MSRP:
Now: $11.99
Was: $14.99
In this Odyssey album, Taking the Plunge, your favorite Adventures in Odyssey characters are faced with life decisions and hard lessons. Will Penny "take the plunge" and say yes to Wooton's...

Moment of Truth - #48 CD Set by Adventures in Odyssey

MSRP:
Now: $19.99
Was: $24.99
Everyone in Odyssey is searching for the truth. Grady discovers more about God, thanks to the Imagination Station. Eugene and his father must uncover the truth about a sinister archeologist, so they...

The Truth Chronicles - CD Set by Adventures in Odyssey

MSRP:
Now: $11.99
Was: $24.99
The kids of Odyssey are about to find out the answers to life's biggest questions about God, faith and even truth itself. Eleven new stories featuring Whit, Connie, Eugene, Wooten and your other...

Camp On It - CD Set by Adventures in Odyssey

MSRP:
Now: $19.99
Was: $24.99
Join your friends from the town of Odyssey on a special journey of imagination, excitement and discovery. Be inspired by 14 faith-building Adventures in Odyssey® audio dramas, and explore 14...

In His Time CD by Won by One

MSRP:
Now: $15.00
Was:
A Delicious Variety - 20 Flavors of A CAPPELLA Christian Music A delicious variety of God-honoring Christian music available at Melt the Heart, ALL A CAPPELLA from a selection of men's groups,...

Calmly Resting in the Lord CD by New Heights Quartet

MSRP:
Now: $14.99
Was:
Men's a cappella quartet with beautiful arrangements of hymns.  Some songs include a full choir with their families singing along.      1. Bring Your Little Bit of...

MSRP:
Now: $9.99
Was:
A beautiful and inspiring collection of traditional hymns, sung by choir and accompanied by full orchestra.  The theme of this recording is sounding the truths of the Great Reformation: opening...

MSRP:
Now: $10.99
Was:
Beautiful harmony of this mixed a cappella group; includes I Found The Lily In My Valley, He Paid a Debt, and His Name Is Higher 1. Come Bless The Lord/Thy Loving Kindness2. Blood Washed Band/God's...

Out of the Blue - #68 CD Set by Adventures in Odyssey

MSRP:
Now: $11.99
Was: $14.99
Album 68, Out of the Blue, has six stories and over 2 hours of adventure! Jaws drop and eyes are opened at the surprises happening around the town of Odyssey. Everyone is finding or learning...

Quicksand: Getting to the Bottom - Lamplighter Theatre Dramatic Audio CD

MSRP:
Now: $35.00
Was:
Truth shines bright in life’s darkest hour. One perilous moment can change our lives forever, as when the Ripley baby suddenly falls overboard. But the simple faith and enduring trust of...

Our Favorites: Actors' Picks - CD Set by Adventures in Odyssey

MSRP:
Now: $27.99
Was: $34.99
Adventures in Odyssey cast members have compiled their favorite episodes from the past 25 years. Learn why these episodes rise to the top for the voices of Odyssey while you listen to over 9 hours of...