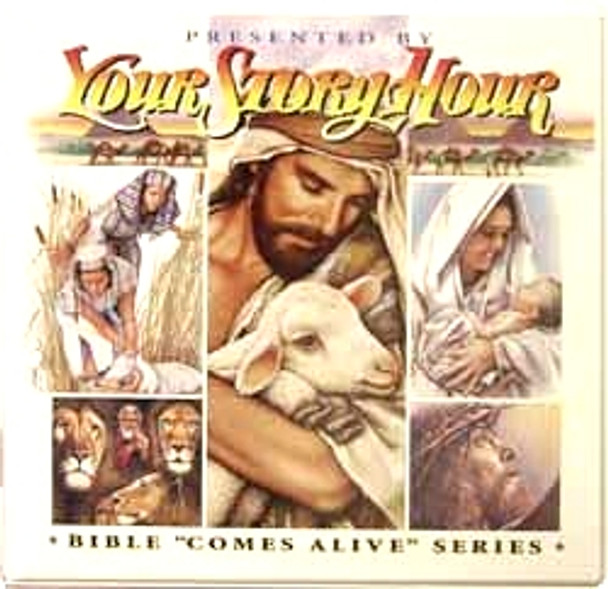 This twelve CD album containes 24 more dramatized, audio, Bible stories and is the second in a series of 5. This album continues the journey through the Old Testament starting with the Israelites in the desert and concluding with David's journey as he runs for his life from the jealous Saul. Other Bible characters included in this album are Miriam, Baalam, Achan, Joshua, Gideon, Samson, Ruth, Samuel, Jonathan, and the giant Goliath. (Each CD is approximately one-hour in length.)

MSRP: $45.00
Now: $39.99
Was: $45.00
This twelve CD album containing 25 dramatized, audio, Bible stories is the last of 5 in the series. This album continues through the life of Jesus including stories about Jesus talking to the...

MSRP: $45.00
Now: $39.99
Was: $45.00
This twelve CD album containing 25 dramatized, audio, Bible stories from the Old and New Testaments if the fourth of 5 and completes the story of Queen Esther saving her people and begins telling the...

MSRP:
Now: $2.75
Was:
The weather or the sniffles is keeping your children inside. Or perhaps they just need something different to do. This little book may be your answer! The Bible Activity Book is filled with word...

Acts of the Apostles Audio CDS by Your Story Hour

MSRP:
Now: $30.00
Was:
This 8 CD album contains 16 dramatized, audio, Bible stories from the New Testament about the early Church. This album brings the Pentcost, Peter, James, John and the life of Paul and his missionary...

MSRP:
Now: $11.99
Was:
Of all the remarkable contrasts to be found in the Bible, there is perhaps none greater than the one between darkness and light. From the very opening verses of Genesis, God defined...

Adventures in Life Vol 10 Audio CDs by Your Story Hour

MSRP:
Now: $4.75
Was:
3 Sticker puzzles with realistic pictures of Bible Stories - Match up the stickers to the numbers on the grid to complete the pictures!  LEVEL: Complex for Ages 5+, 104 stickers in Each Puzzle

MSRP:
Now: $13.99
Was:
A cappella conservative men's quartet harmonizes and sings a cappella Christian hymns including I Stand Redeemed, Lily In My Valley, If That Isn't Love, and Swing Low Sweet Chariot.    1...